Energy transfer between molecules is a basic process, observed in many fields spanning from biology to physics. However, this process is always limited to a very short range in free space, typically on the order of a few nanometers.

The team lead by V. Krachmalnicoff (Institut Langevin ESPCI Paris, PSL, CNRS) demonstrated that the range of the energy transfer between fluorescent molecules can be increased by a factor of almost one thousand using a simple silver mirror. Indeed, the electromagnetic waves involved in the usual process are replaced by plasmons propagating at the interface between the silver surface and the surrounding medium (air or a polymer layer) over distances of several micrometers. Our work proves for the first time that energy transfer range and efficiency can be greatly enhanced using surface plasmons [1].

Moreover, we have recently demonstrated that it is possible to observe such energy transfer at the single photon scale over distances of several microns [2]. This is achieved by using silver nanowires that act as waveguides for plasmons, enhancing energy transfer efficiency. By coupling a single quantum dot and some organic molecules to the wire, we observed a simultaneous blinking of the molecules and the quantum dot mediated by single plasmons. This is a first step towards the investigation of cooperative emission phenomena. 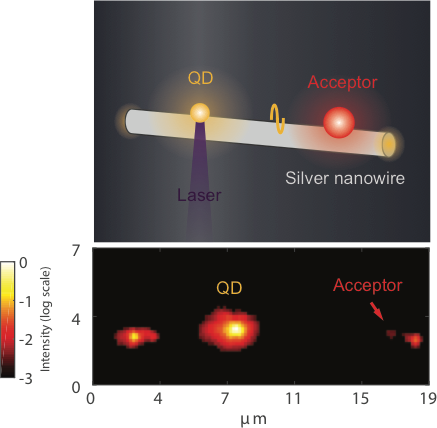 Figure (Up): Artist’s view of energy transfer between a quantum fot and a fluorescent emitter propagation on a silver wire.