Description of the work  :

Spin-orbit interaction, a property of heavy elements, links the electron’s spin orientation to its momentum in a crystal. In some materials, a high spin-orbit interaction can lead to spectacular topological properties, that have been only recently discovered: for instance, the quantum spin Hall effect in a two dimensional conductor is a phase in which transport is exclusively due to one dimensional edge states, with a current direction that corresponds to a single spin orientation (“spin-filtered edge states”), in zero magnetic field.

The spin-orbit interaction of carbon is intrinsically small, so that inducing topological states in graphene seems out of reach. Nevertheless, several strategies have been attempted to induce a sizeable spin-orbit coupling in graphene. Our group has resorted to functionalizing graphene with Pt-porphyrin molecules, planar molecules that have a platinum atom at their core, and that are provided by our chemist colleagues from CEA.  The periodic arrangement of these molecules on graphene is controlled by STM experiments performed in the group of Andrew Mayne. Our first results have found that the molecules exchange electrons with the graphene, leading to a neutralization of charged impurities, improving graphene’s mobility, and inducing a gate-dependent magnetism in graphene. The next step is to control and quantify the spin-orbit interaction induced by the Pt atoms.

We will employ mesoscopic measurements to detect the induced spin orbit, such as magnetoresistance atlow temperature, the superconduction proximity effect and its quantum interferences with magnetic field, as well as non local trasnport. 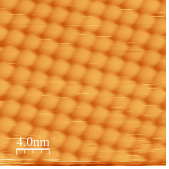 STM image of the assembly of Pt(II) tetraphenylporphyrin on graphene on SiC (A.Mayne, to be published) 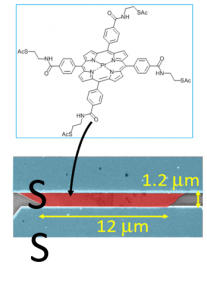 Near RER B, station « le guichet »