Multifunctional quantum bits for the computers of the future

In the smallest memory module of the quantum computer chip, the Qubit, there are not only two binary values, 0 or 1, like in the classical computer, but also values in between, the quantum mechanical superposition states. This increases the computational power of a quantum computer significantly, because with these quantum properties many computational processes can run simultaneously. « A promising approach for the next generation of quantum computers is based on materials in which individual systems are no larger than an atom and whose quantum properties are visually accessible and controllable, » explains Professor David Hunger of Physical Institute of KIT (Germany), who coordinates the project SQUARE.

In this context, rare earth ions, electrically charged atoms of rare earth metals, show outstanding potential to be explored in SQUARE. The ions are able to store quantum states for a long time and can be addressed individually by light in special crystals, which makes a large number of ions accessible as Qubits. « Rare earth ions, due to their special electronic structure, have their own shield against disturbing fields », presents Hunger, « they can also interact with each other in a strong interaction, which is an important basis for the realisation of Quantum circuits.” In addition, the quantum properties can be read directly through light and quantum states can be trans-mitted to photons. This allows remote quantum nodes to be net-worked and used for quantum communication.

The research on individual rare earth ions is still at an early stage, but « the project is pursuing a very promising platform, which has many advantages over what established approaches such as trapped ions and superconducting quantum circuits can offer, « says David Hunger.

The goal of SQUARE is to establish individually addressable rare earth ions as a basic building block for scalable quantum technologies. In particular, the functional elements of an optically readable multiqubit quantum register are to be demonstrated and building blocks of a quantum network realized. In the future, a huge increase in computational power in quantum computers will be realized. Together with industry partners, we want to develop the key technological components required for a scalable implementation.

The SQUARE project is located in the basic research segment of the flagship and is supported by three million euros for three years. It comprises a consortium of six international scientific groups from Arhus (Denmark), Lund (Sweden), Barcelona (Spain), Paris (France), Stuttgart and Karlsruhe, as well as two technology companies Thales (France) and Attocube (Germany). The project is coordinated by Professor David Hunger of the Karlsruhe Institute of Technology (Germany). 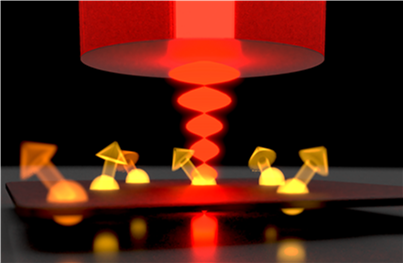 In comparison to classical computers, future quantum computers will solve certain tasks much more efficiently. While traditional computers run one step at a time, quantum computers can perform many computational steps in parallel. Large amounts of data could be therefore processed much faster. The microstructure of certain materials and elements of the smallest storage units of quantum computer chips, the quantum bits, is of elementary importance. Chemists from the Institut de Recherche de Chimie Paris (laboratory member of SIRTEQ), in collaboration with European partners, deal with materials for such multifunctional quantum bits. Their project « Scalable Rare earth ion quantum computing Nodes » (SQUARE) is supported by the European Commission with three million euros.