Earth Observation Data Science and Beyond
Satellites are the only global Earth Observation (EO) data source. The field of EO is presently at a key turning point, EO Big Data are now freely and openly accessible, the areas of Artificial Intelligence (AI) are explosively progressing and the computational and communication capacities are immense. This context and trends bring the AI paradigms and EO methodologies and applications in a new era. The theoretical and technological progress is amplifying the use of the EO broadening the impact in all major domains, climate, food security, urbanization, only to enumerate few. The presentation is an overview of the achievements in the frame of International Blaise Pascal Chair of Excellence for EO Data Science in these areas, concluding with a vision of the AI4EO domains.
Mihai Datcu received the M.S. and Ph.D. degrees in Electronics and Telecommunications from the University Politechnica Bucharest UPB, Romania, in 1978 and 1986. In 1999 he received the title Habilitation à diriger des recherches in Computer Science from University Louis Pasteur, Strasbourg,
France. Currently he is Senior Scientist and Data Intelligence and Knowledge Discovery research group leader with the Remote Sensing Technology Institute (IMF) of the German Aerospace Center (DLR), Oberpfaffenhofen, and Professor with the Department of Applied Electronics and Information Engineering, Faculty of Electronics, Telecommunications and Information Technology, UPB. From 1992 to 2002 he had a longer Invited Professor assignment with the Swiss Federal Institute of Technology, ETH Zurich. From 2005 to 2013 he has been Professor holder of the DLR-CNES Chair at ParisTech, Paris Institute of Technology, Telecom Paris. His interests are in Data Science, Machine Learning and Artificial Intelligence, and Computational Imaging for space applications. He is involved in Big Data from Space European, ESA, NASA and national research programs and projects. He received in 2006 the Best Paper Award, IEEE Geoscience and Remote Sensing Society Prize, in 2008 the National Order of Merit with the rank of Knight, for outstanding international research results, awarded by the President of Romania, and in 1987 the Romanian Academy Prize Traian Vuia for the development of SAADI image analysis system and activity in image processing. He is IEEE Fellow. He is holder of a 2017 Blaise Pascal Chair for EO Data Science at CEDRIC, CNAM. 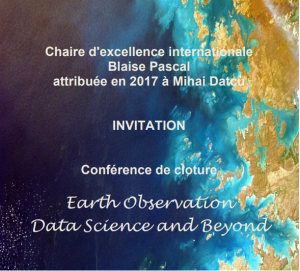