The quantum optics group of SIRTEQ at the Institut d’Optique Graduate school had succeeded to assemble three-dimensional atomic structures atom by atom.This great work was published on Nature. Below you find the abstrat of the work.

A great challenge in current quantum science and technology research is to realize artificial systems of a large number of individually controlled quantum bits for applications in quantum computing and quantum simulation. Many experimental platforms are being explored, including solid-state systems, such as superconducting circuits1 or quantum dots2, and atomic, molecular and optical systems, such as photons, trapped ions or neutral atoms3–7. The latter offer inherently identical qubits that are well decoupled from the environment and could provide synthetic structures scalable to hundreds of qubits or more8. Quantum-gas microscopes9 allow the realization of two-dimensional regular lattices of hundreds of atoms, and large, fully loaded arrays of about 50 microtraps (or ‘optical tweezers’) with individual control are already available in one10 and two11 dimensions. Ultimately, however, accessing the third dimension while keeping single-atom control will be required, both for scaling to large numbers and for extending the range of models amenable to quantum simulation. In this article, the groupe report the assembly of defect-free, arbitrarily shaped three-dimensional arrays, containing up to 72 single atoms. We use holographic methods and fast, programmable moving tweezers to arrange—atom by atom and plane by plane—initially disordered arrays into target structures of almost any geometry. These results present the prospect of quantum simulation with tens of qubits arbitrarily arranged in space and show that realizing systems of hundreds of individually controlled qubits is within reach using current technology. 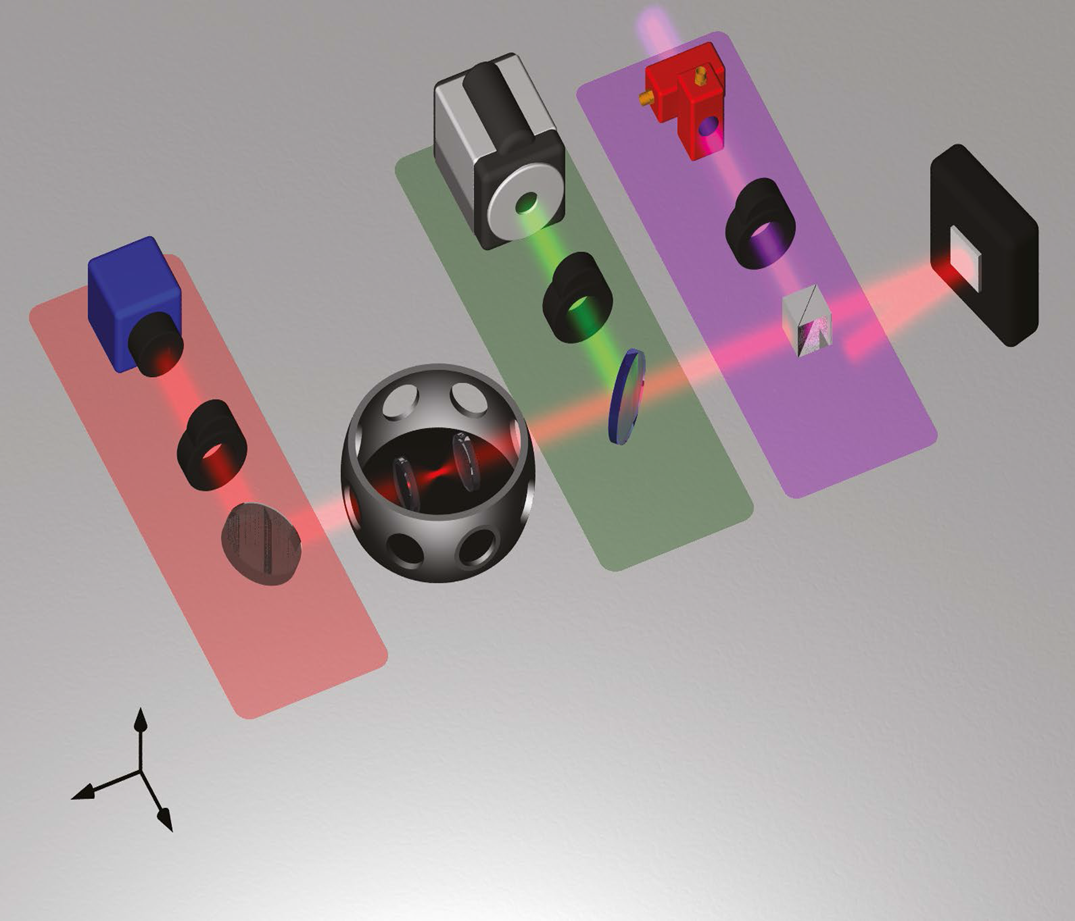 We combine a spatial light modulator (SLM) and a high-numerical-aperture aspheric lens (AL) under vacuum to generate arbitrary 3D arrays of traps. The intensity distribution in the focal plane is measured with the aid of a second aspheric lens, a mirror (M) and a diagnostics CCD camera (d-CCD). The fluorescence of the atoms in the traps at 780 nm is separated from the dipole trap beam
with a dichroic mirror (DM) and detected using an electron-multiplying CCD camera (EMCCD). For atom assembly we use moving tweezers superimposed on the trap beam with a polarizing beam splitter (PBS). This extra beam is deflected in the plane perpendicular to the beam propagation with a 2D acousto-optical deflector (AOD), and its focus can be displaced axially by changing the focal length of an electrically tunable lens (ETL3). The remaining electrically tunable lenses (ETL1 and ETL2) in the camera paths allow imaging of different planes along z. The inset depicts the intensity distribution of the trap light forming a bilayer array (red) and the action of the moving tweezers on an individual atom (purple).